In emergency call 112/911 (English, German, Russian, France, Italian and Spanish languages are supported), or direct national emergency numbers 155 for EMS, 158 for Police or 150 for Fire dept. (for calls in Czech language only).

Overview of EMS in Czech Republic

In the Czech Republic (10.000.000 inhabitants), EMS has a long and famous tradition (the first „EMS“ named „The Prague Volunteer Rescue Corps“ in the capital of Prague was established in 1857). As it is based on the traditions of German-speaking countries, a physician was usually a member of the crew. Nevertheless, in last years the system changed and is based more or less on non-physician crews (paramedics, emergency rescuers), while physicians responds less than 1/3 of all cases only, especially the life-threating situations.

EMS is a separate service organized on regional level, so that there are 14 regional EMS services in CZ, each with one specialized EMS dispatch and number of ambulance stations in each region (size of the regions varying between 300.000 and 1.500.000 inhabitants). There are also a few private providers in EMS, which are a part of the regional system. Fire service and Police officers are also dispatched for serious medical emergencies in the role of First responders, especially in remote areas.

All EMS dispatch centres are staffed at least by EMS nurses or certified paramedics, some of the centres have an EMS physician on duty, too.

A key principle of the EMS system is a  20-minute response interval for all citizens, but in fact, average response time in cities is up to 10 minutes. The network of basic ambulance stations is already established, and the quality of performance is to be guaranteed by the regional authorities.

Since 2016, there is a nationalwide app for all smartphones available for medical emergency calls „Zachranka“. The app is supported by all Czech EMS services as well as EMS in Austria and Hungary and also by Mountain resuce service in Slovakia. The main benefit is to provide the best available location of the caller to medical dispatecher, but also supports features like nearest AED and other medical service location, non-verbal communication tool for impaired persons/forigners, automatic detection of appropriate area and direct alarming of Moutain and Water rescue service etc.

All ambulances in the system are ALS equipped according to EU standards.
Most of them are based on well-known vans as Mercedes, Ford, Renault or Volkswagen.

The ground based EMS system is backed up by an extensive system of 10 HEMS helicopters. Most centers average between 500-600 runs per year. Eight of the helicopters have private operators, Police as well as Army flies one station each. The flying medical staff is provided by appropriate regional EMS service (with exception of military helicopter, which is staffed my military personell).

4 HEMS helicopters are available in day shifts only, while another five are avialable 24/7. All flights are operate under VFR conditions only.

In the whole Czech Republic, EMS responded 992.500 primary cases including 6.275 HEMS missions (9.900 per 100.000 inhabitants; 2.700 cases and 17 Air Ambulance flights per day). 28% of all cases is responded by physician-staffeed ambulance while 72% are responded by EMS-(nurse/paramedic) crew. 87% of all HEMS flights are flights directly to the accident scene, 13% are urgent or non-urgent inter-hospital flights.

CPR survival rates are recognized as a most important quality marker of EMS. There is no central Utstein-style outcome-based evidence of out-of-hospital cardiac-arrest patients, but for example, in the capital of Prague, the survival-to-discharge rate with no or low neurological disability was overall 16%, or 36% when VF as a first ECG rhythm was observed. Thanks to widely-developed T-CPR programs the bystander-CPR ratio reached as much as 80% in Czech Republic (EURECA ONE and EURECA TWO). This is one of the world-best results.

The whole EMS system is financed by general healthcare insurance, in cooperation with local authorities‘ financial resources. Some specialized activities (especially the air ambulance service) is organized and financed directly by the Ministry of Health.

The average cost of 1 case responded by ground ambulence was approx. 300 EUR (1/3 covered by health insurance companies, 2/3 by regional budget). In some regions, uninsured patients (i.e. mainly non-EU forigners) should pay for the service 100 – 300 EUR, depending on region.
The average cost of 1 case responded by air ambulance was approx. 4.500 EUR  (fully covered by Ministery of health budget). No extra payments are required even from non-insured patients.

Emergency medicine in the Czech Republic

Traditionally the majority of doctors practicing emergency medicine in the Czech Republic have been anesthesiologists. Emergency Medicine has been established as a subspecialty in 1999 with a two-year curriculum. It requires prior training in anesthesia, internal medicine or some other field.  More than five hundred physicians already received their board certification, based on in-hospital training within different fields of medicine, and pre-hospital emergency care. There are only a few in-hospital Emergency Departments with bed facilities – up to twenty in-hospital Emergency Departments have opened throughout the country, varying in size from 2 to 10 beds, and with varying degrees of acuity and admissions. Most doctors and paramedics work 14 to 16 12-hour shifts in a month.

Thank you for visiting zachrannasluzba.cz, the most popular, independent and non-profit Emergency Medical Service (EMS) web in Czech Republic, Europe. As the whole web is written in Czech language (it is very nice, but a little bit difficult to learn), we have prepared at least a small English summary about EMS system in our country. Feel free to leave a comment for any questions. 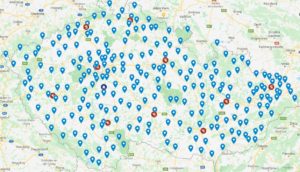